For Vegan MoFo (Vegan Month of Food) this year, I will be cooking my way around the world with interesting dishes from different regions. 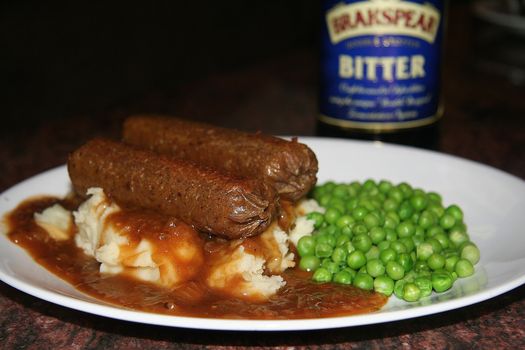 I’ve been experimenting with a new ingredient for my sausages that I’ve used a couple of times now. I was inspired by Quorn, a brand of vegetarian meat substitute that has a huge range of different products. Quorn isn’t vegan, but the main ingredient in Quorn is mycoprotein, which is a type of factory fabricated fungus. Of course, I have no way of making this type of fungus in my kitchen, so instead I used a fungus which is available, i.e. the marvellous mushroom. I used mushrooms in place of the tofu or beans I usually use in my sausages.

The first time I made sausages with mushrooms, I used fresh shiitake mushrooms, which are ever so tasty, but freakin’ expensive. This time, I used half shiitakes and half ordinary white button mushrooms.

The sausages were a bit softer using shiitake/button mushrooms, than with just shiitakes. I’ll be experimenting further with using mushrooms in sausages, but for now I’ll post the recipe as I made it. The seasoning combo I used was deelish.

I served the sausages with Mr Thrifty’s special mash, along with onion gravy and peas. The recipe for onion gravy is here, the only modification I made was to use vegan margarine instead of butter. It was super scrummy.

To really get into the whole pub experience, the meal was made complete with beer (for Mr Thrifty) and homemade cider (for me).

1. If you’re starting with whole almonds, grind them in the blender first while it’s still clean and dry, then remove and set aside.

2. Thickly slice the mushrooms, then saute in a bit of the coconut oil until excess moisture from mushrooms has evaporated. Set aside.

3. Put the bouillon cube into a glass measuring cup and add a couple of tablespoons of boiling water; stir to dissolve the cube. Add soy sauce to measuring cup, then add enough water to equal 125ml (1/2 cup). Add this to the blender.

4. Add remaining ingredients to blender EXCEPT gluten. Blenderise until completely smooth. If the mixture is too thick to blend smooth, add a bit more water, one tablespoon at a time, until the mixture can be blended smooth. (I added three extra tablespoons of water.) Empty into a large mixing bowl.

5. Add gluten to wet mixture in bowl and mix well, until you have a uniform soft dough. If the dough is too soft to form into sausages, add more gluten, one tablespoon at a time, until dough is firm enough.

6. Divide dough into eight pieces. Roll each piece into a sausage shape. Wrap each sausage in baking paper and then in aluminium foil. Lightly twist the ends together.

7. Bring water to boil in a pot that has a steamer insert. Arrange wrapped bangers in your steamer insert, with seam side down to reduce the likelihood of a foil blowout. (Packing the bangers tightly in the steamer also reduces this chance.) I arranged four on the bottom of the steamer insert, then another four at a 90 degree angle on top of them.

8. Steam for 40 minutes over gently simmering water. If you’ve arranged your bangers in two layers, switch their positions halfway through the cooking time (bottom ones on top and top ones on bottom). Turn heat off and let cool.

9. To cook, gently pan fry in a bit of olive oil until golden.

Can be frozen for future use: leave them wrapped and place in a freezer bag.

1. Peel potatoes and cut into large chunks. Bring a pot of water to the boil, then add potatoes and simmer 15 minutes, or until tender.

2. Drain potatoes, reserving a bit of the cooking water. Mash potatoes in the pot, then add margarine, mayonnaise and bouillon powder. If the mixture is a bit dry, add some of the reserved cooking water.