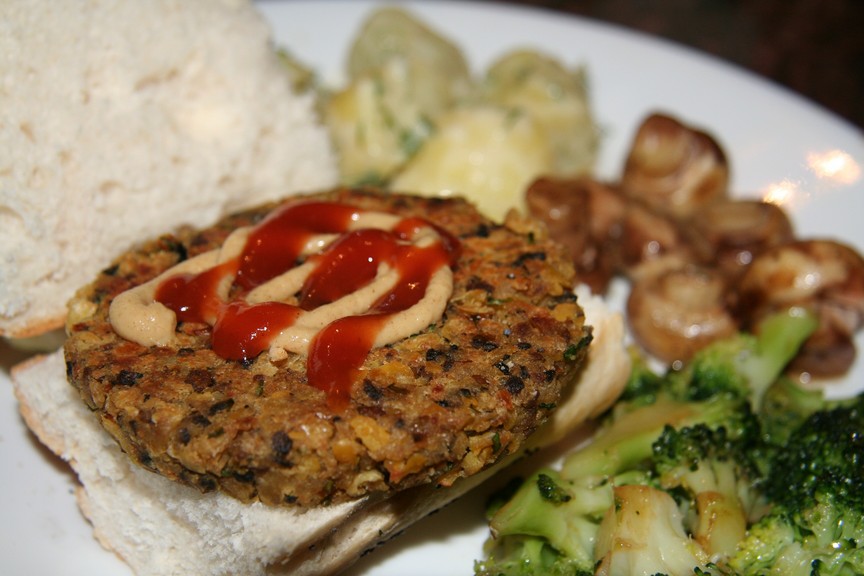 I like to try different veggie burger recipes, though I don’t often find one that I would make again.

One type of veggie burger that I haven’t had much luck with in the past is the bean burger. The texture never seems quite right… they’re usually really mushy (remember: mush-burgers aren’t us). I’ve tried making bean burgers with wheat gluten to firm them up, and although it did improve the texture, the burgers just didn’t really excite me much.

I thought I would try making burgers from chickpeas, because unlike most other legumes, chickpeas don’t have a mealy/pasty texture; it’s more crumbly and nutty. And anyhoo, I had some chickpeas in the fridge that Stanley had cooked for me the day before.

Since I also had some ‘shrooms in the fridge, I settled on this recipe from BBC food.

I decided to do half the recipe, making three burgers (the recipe below is the full recipe, making six burgers). I followed it pretty closely, except that I omitted the lemongrass. I also added a tablespoon of flour for extra firmness, but didn’t use any flour for dusting.

They turned out most delicious and held up well in the frying pan. I will definitely be making these again!

Next time I might dust them with flour before frying, to give them a bit of a crunchy crust.

3. Crush chickpeas with a fork. Add to the mushroom mixture along with breadcrumbs and fresh coriander (cilantro). Mix well with a fork. Taste and adjust seasonings. Add flour, mix thoroughly.

5. Heat remaining tablespoon of olive oil in a heavy frying pan and fry burgers for 3 to 4 minutes on each side, or until golden brown and heated through.

Serve on buns with your choice of fixings.